Lincoln and Guba (1985) suggested a couple of terms that are better suited than reliability is to represent what it represents (as will be discussed below). One of those terms is transferability.

It will be assumed in the later paragraphs, therefore, that while reliability is being discussed, it’s also a discussion of transferability and vice versa. They are both the same thing.

Reliability is an important principle in two main stages of research, data collection and findings. The term is generally applied to data collection tools i.e., whether they are reliable or not.

What this means is that whether a tool—suppose a questionnaire—will yield the same results if applied under different settings, circumstances, to a different sample, etc.

Reliability is, therefore, a measure of a test’s or tool’s consistency.

That is the case for what it means to have a reliable tool or instrument. But what about reliable results, or reliable scores?

Reliable findings imply that no matter which instrument or tool is used to measure a certain thing, the results that the tool will yield will remain the same. Again, this is only possible when the measuring tool is reliable, to begin with.

In yet simpler terms, reliability refers to reaching to same conclusions consistently or repeatedly.

The following figure very effectively demonstrates what reliability is (about validity, as will be discussed later): 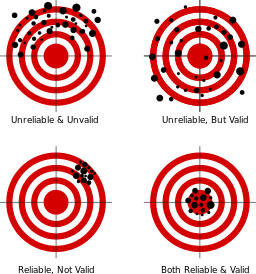 When it comes to qualitative research, things like tests are commonly used. They can be in the form of pre-and post-tests that are administered on a sample, to observe the effects of something before and after exposure. Similarly, other qualitative tools like plotting graphs for the gathered data on test scores might be used as well.

Whichever qualitative method or tool is used, it has to be reliable.

Mostly, in research, tests are conducted in the form of questionnaires, surveys, etc. to gather information in the data collection stage. Those tests must remain reliable.  In other words, if the same test is given to the same student or matches students on two different occasions, the test should yield similar results.

Test reliability means a test yields the same scores no matter how many times it’s administered, even if the test format is changed. Performance in a test might be affected by factors besides the abilities the test aims to measure (further discussed below).

Important to remember: Examination of reliability helps researchers tell apart the factors contributing most to a certain score, from the ones that have little to no effect.

Importance of Reliability in Qualitative Research

1. First of all, reliability provides a measure of the extent to which a test-takers (any participant from the research sample, for instance) score reflects random/systematic measurement error. Observed Score = True Score + Error

Random error is an error that occurs due to random reasons and affects the results. Random factors include environmental factors, weather conditions, personal and/or psychological problems experienced by the researcher, and so on. Such errors affect results differently.

Systematic error is an error in a system. It affects the results in the same way. Such errors mostly include a fault in a measuring instrument; an incorrect marking scheme, etc.

The observed score is the total score that a test taker, for instance, gains on a test.

A true score is a score that is obtained, based on one’s knowledge.

Error: is the random or systematic error.

As the above formula shows, it is only when an error is accounted for that a researcher can tell what the actual, true score is. Once the error has been removed, the testing measure or tool can be deemed reliable or not. If, for instance, even after removal of the error, the observed scores are not obtained consistently, it means the test/tool is not reliable.

2. The second reason to be concerned with reliability is that it is a precursor to test validity. That is, if scores can’t be assigned consistently, it is impossible to conclude that the scores accurately measure the domain they’re supposed to measure (validity).

Here, validity refers to the extent to which the inferences made from a test are justified and accurate. In other words, if a certain test/tool measures what it’s supposed to measure, it’s said to be valid. However, formally assessing the validity of specific use of a test/tool can be a difficult and time-consuming process.

Therefore, reliability analysis is often viewed as the initial step in the validation process. If the test/tool is unreliable, research won’t need to spend the time investigating whether it is valid; it won’t be. Contrarily, if the test has adequate reliability, a validation study would be worthwhile.

3. Quantitative research assumes the possibility of replication; if the same methods are used with the same sample, then the results should be the same. Typically, quantitative methods require a degree of control. This distorts the natural occurrence of phenomena.

Indeed, the premises of natural sciences include the uniqueness of situations, such that the study cannot be replicated – that is their strength rather than their weakness. However, this is not to say that qualitative research need not strive for replication in generating, refining, comparing, and validating constructs.

Types of Reliability in Qualitative Research

Now that the definition and importance of reliability have been established, it’s time to look at the multiple types of reliability that exist in research.

The test taker can be an individual from the sample, a student on whom the test is administered, a respondent of a questionnaire, or a participant of a survey. Naturally, all such individuals are human. They are therefore prone to experience stress, fatigue, anxiety, and other psychological and/or physiological factors. These factors might interfere and directly influence how these people perform on a test, survey, questionnaire, etc.

Also included in this category are such factors as a test-taker’s “test-wiseness” or strategies for efficient test-taking (Mousavi, 2002, p. 804).

This is further divided into two types:

It’s reliability within the same rater.

All such factors directly influence test administrator reliability. If they’re mismanaged, this reliability will be reduced and vice versa.

How is Reliability Measured?

There are different methods of ensuring that the test, questionnaire, survey, or whichever other data collection tool is used, is very reliable. The methods depend on a couple of things, mainly the type of research, its objectives, sample type and so on.

However, the most common methods to determine and measure the reliability of a test or measuring tool are listed below. It should be noted that these are the general, most commonly used methods. There are variations to these methods themselves.

1. Test-retest reliability: This is a measure of reliability obtained by administering the same test twice over some time to a group of individuals. The scores obtained in the two tests can then be correlated to evaluate the test for stability over time.

This method is used to assess the consistency of a measuring instrument or test from one time to another; to determine if the score generalizes across time. The same test form is given twice and the scores are correlated to yield a coefficient of stability. High test-retest reliability tells us that examinees would probably get similar scores if tested at different times. The interval between test administrations is important—practice effects/learning effects.

2. Parallel or alternate form reliability: This is a measure of reliability obtained when research creates two forms of the same test by varying the items slightly. Reliability is stated as a correlation between scores of tests 1 and 2.

This method is used to assess the consistency of the results of two tests constructed in the same way from the same content domain; to determine whether scores will generalize across different sets of items or tasks. The two forms of the test are correlated to yield a coefficient of equivalence.

3. Internal consistency reliability: This method involves ensuring that the different parts within the same test or instrument measure the same thing, consistently. For example, a psychological test having two sections should be consistent in what it claims to measure, for instance, personal well-being. The first section could identify it via some questions, while the second section could include narrating a personal account.

Other Strategies to Improve Reliability of a Research Tool

To ensure their data collection test, tool or instrument is reliable, a research can:

Criteria for Reliability in Qualitative Research

Denzin and Lincoln (1994) suggest that reliability as replicability in qualitative research can be addressed in several ways:

Reliability refers to the extent to which scores obtained on a specific form of a test, measuring tool or instrument can be generalized to scores obtained on other forms of the test or tool, administered at other times, or possibly scored by some other rater(s).

There are various types of reliability in research, each with its own dynamics. Certain criteria have to be met for a test or instrument to be reliable. There are many methods and strategies researchers can use to improve both the overall reliability as well as a specific type of reliability of their data collection tool.